Cheryl in the News! 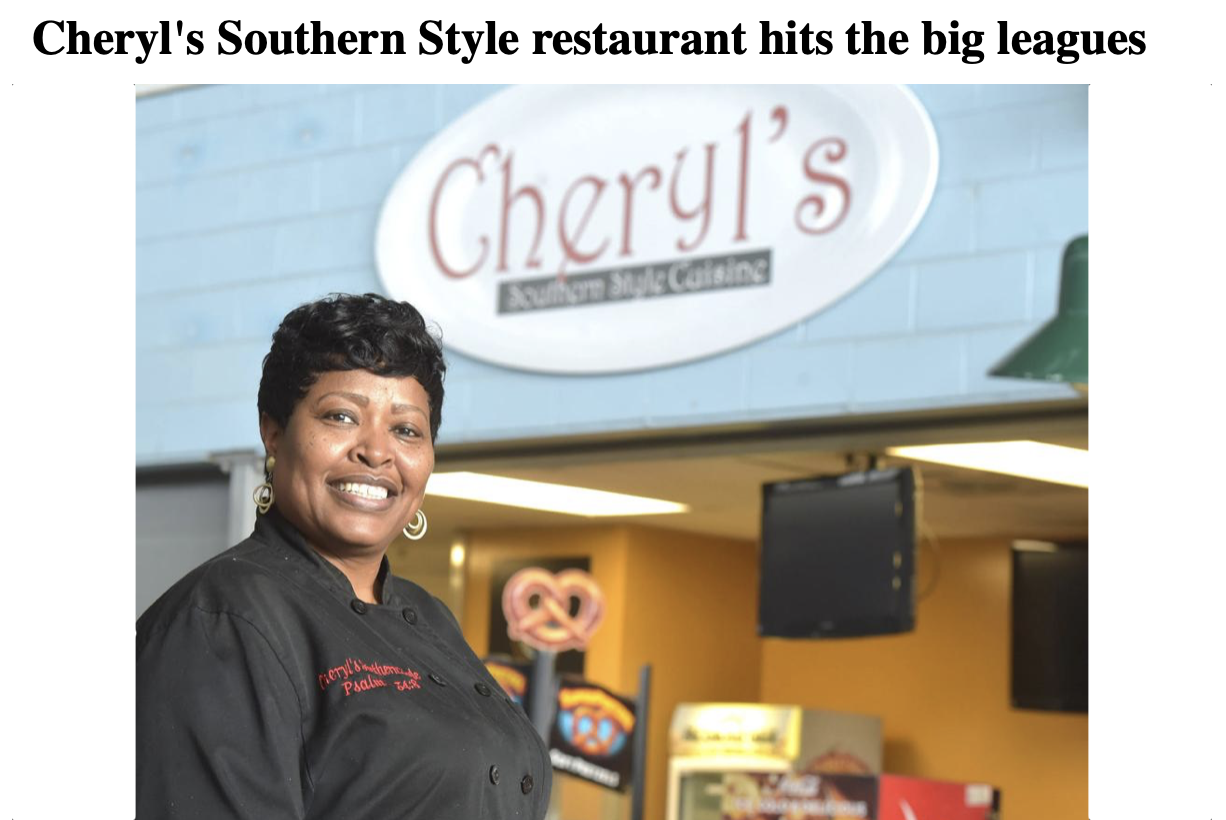 Thanks to the Philadelphia Union and Roe Fabricators, Stevens' "Cheryl's Southern Style Cuisine" can be seen in all its fluorescent glory at Stand 104 in Talen Energy Stadium. "I couldn't believe it when I looked around the corner and I saw it," the 56-year-old entrepreneur said of the sign now hanging above her stadium stall selling fried chicken, biscuits with caramelized onions, pulled pork topped with cole slaw and homemade mac and cheese.

"It's amazing," she said of her light. "It's overwhelming. I'm happy to finally see it come to fruition."

Stevens first started with a takeout spot on Welsh Street in 2003 with her niece, then by Cheryl's Southern Style restaurant on East Fourth Street from City Hall until that closed in 2014.

In 2010, she operated Stand 104, but by contract had to sell her delicacies under the moniker of "Q BBQ." That was the same year she was the recipient of the Madam C.J. Walker Award from the Pennsylvania chapter of the National Coalition of 100 Black Women Inc.

"The hard work paid off," Stevens said this week after the new sign was installed. "They saw my consistency. I continued to produce a quality product that people like."

And, although her eatery and restaurant have closed, her culinary reach has done nothing but expand.

Stevens teaches culinary arts to sophomores, juniors and seniors at Chester High School and top performers get to work with her catering operations at the Market Street Ballroom in Marcus Hook.

With her catering operations, Stevens' endeavor employees anywhere from eight to 23 people at any given time, based on her event needs.

In addition, her dishes are available at West Chester, St. Joseph and Immaculata universities, as well as Foxy Loxy in Kennett Square and Pete's Market in Exton.

"I just acquired a shared space in Brookhaven where I'll be doing the catering from," Stevens added.

Starting in March, Stevens will be sharing space with Sharie Platt and "Heavenly Host Catering" at 4235 Edgmont Ave. in Brookhaven from 9 a.m. to 7 p.m. on the second and fourth Saturdays and Sundays of each month.

Stevens encouraged those interested in learning more about her food to contact her 267-231-9440 or This email address is being protected from spambots. You need JavaScript enabled to view it.. In the meantime, she's ready to start serving the four to five games a month plus additional events that will occur at Talen Energy Stadium even as the Philadelphia Union prepares to start its season March 2.

Even throughout the time, she held onto the belief that someday the light would come.